Fear is a primal and vital response to physical and emotional danger that has been essential for our evolution.

If you didn’t feel fear, you wouldn’t be able to protect yourself from legitimate threats as was the case in times past. In our modern world physical fear has a far lower priority and although the fight-flight-or-freeze responses to specific scenarios is now a critical issue.

Many unspoken fears include, failure, mistakes, imperfection, and even fear itself. 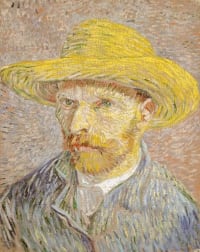 On October 2, 1884, in a letter to his younger brother Theo, Vincent Van Gogh wrote about the fear of mistakes,

If one wants to be active, one mustn’t be afraid to do something wrong sometimes, not afraid to lapse into some mistakes. To be good — many people think that they’ll achieve it by doing no harm — and that’s a lie… That leads to stagnation, to mediocrity. Just slap something on it when you see a blank canvas staring at you with a sort of imbecility.

You don’t know how paralyzing it is, that stare from a blank canvas that says to the painter you can’t do anything. The canvas has an idiotic stare, and mesmerizes some painters so that they turn into idiots themselves.

Many painters are afraid of the blank canvas, but the blank canvas IS AFRAID of the truly passionate painter who dares — and who has once broken the spell of “you can’t.”

Life itself likewise always turns towards one an infinitely meaningless, discouraging, dispiriting blank side on which there is nothing, any more than on a blank canvas.

But however meaningless and vain, however dead life appears, the man of faith, of energy, of warmth, and who knows something, doesn’t let himself be fobbed off like that.